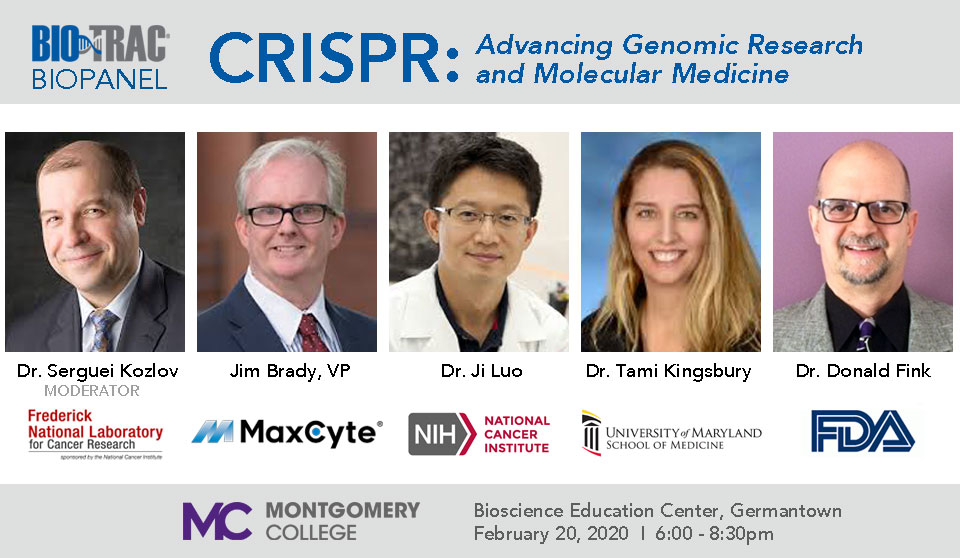 Montgomery College’s Bioscience Education Center (BEC) is the place to be, to see and to hear from some of the brightest life science minds in BioHealth Capital Region (BHCR).  Home to the region’s most important biotech workforce development and training programs, including; Bio-Trac, the graduate/post-graduate level program offering hands-on laboratory training workshops for research scientists, BioTrain, the incumbent worker upskilling program, and Montgomery College’s Biotech AAS and Biomanufacturing Certificate programs, the BEC has become an epicenter where industry, academia, and the workforce converge to share knowledge, build relationships and advance science.  Recently Bio-Trac hosted a panel featuring key thought leaders on the topic of Gene Editing with CRISPR.

Dr. Serguei Kozlov, Principal Scientist/Team Leader at Frederick National Laboratory for Cancer Research, moderated the panel, which was entitled “How CRISPR is Advancing Genomic Research and Molecular Science.” Kozlov is a key influencer in the field of CRISPR and is the Workshop Director for Bio-Trac’s Gene Editing with CRISPR and Advanced Gene Editing with CRISPR hands-on workshops.

CRISPR is a practical, powerful and versatile tool that lab researchers started to embrace about a decade ago to edit genomes and alter DNA. The technology allows genetic material to be added, “knocked out” (removed) or altered, ideally at particular targets in the genome and in a pre-designed way to meet researchers’ needs. CRISPR is one of the newest gene-editing tools that has risen to prominence and generated tremendous excitement across the last three years. CRISPR is an incredibly promising tool that, until last year, has been limited to laboratory use and animal models due to unknowns regarding its safety and efficacy for humans. In 2019 however, the University of Pennsylvania launched the first US clinical trial using CRISPR for cancer treatment, and at least a half dozen additional trials are being planned across the US, Canada, and Europe.

For those stricken with single-gene mutations like cystic fibrosis, muscular dystrophy, hemophilia or sickle cell disease, CRISPR offers hope for better and more durable treatments in the future. CRISPR also has promise for, heart disease, mental illness, and HIV, among other more genetically sophisticated illnesses, such as cancer and autoimmune maladies. CRISPR is a remarkably user-friendly, efficient and cost-effective gene-editing tool. While the tool is simple, the ramifications of its usage are complex, which is precisely what the CRISPR panelists had come to discuss with an audience of more than 100 curious panel attendees.

CRISPR has come a long way since its discovery in E-Coli in 1987 and represents an evolution from other more expensive, harder to use and less accurate gene-editing tools that emerged prior to CRISPR’s rise as a scientific research disruptive force.

“We use CRISPR technology to do functional analysis and interrogation of proteins, the mapping of proteins, the generation of mutations and CRISPR screening…CRISPR actually works and can work for anyone in this audience, with your own hands, it’s really that accessible. It has really opened up mammalian biology and we can now do true functional studies in mammalian cells. It’s really an exciting time for science. You can use it in many different ways all of which have their pros and cons,” Dr. Kingsbury shared.

MaxCyte’s Jim Brady concurred with Dr. Kingsbury’s view that CRISPR is an exciting technology and has wide-reaching applications: “I think we can call CRISPR-Cas9 disruptive from a number of different perspectives. First of all the breadth of applications is really impressive. You can treat intractable diseases like sickle cell but it is also used in agriculture to modify crops and livestock. It’s used in basic research. It’s also disruptive when compared to what’s been available in the past. What’s really impressed me about CRISPR is its higher efficacy, specificity, and ease-of-use. CRISPR’s versatility makes it a very disruptive technology.”

MaxCyte is a Maryland-based biotech company that has developed a proprietary technology for large scale cell engineering that allows researchers to introduce molecules into cells using Flow Electroporation.  The company’s advanced ExPERT™ platform is used by leading companies like Kite Pharma, a Gilead Company, and CRISPR Therapeutics, among other major life science partner. Over the past few years, CRISPR-Cas9 delivery has been a hot area for many companies who are engineering cells by putting CRISPR-Cas9 into e.g. T Cells or stem cells to change a gene or introduce new genes.  Brady works directly with MaxCyte partners to help them get the maximum benefit from the technology and the maximum efficiency of their gene-editing functions. He is literally on the front line when it comes to the CRISPR-Cas9’s adoption and clinical progress.

No one doubts CRISPR’s immense potential to transform science, but many complex questions remain in the areas of clinical applications, safety, regulatory and bioethics. There are so many unknowns regarding CRISPR’s impact on human biology and the possible unintended safety consequences of gene editing. Bioethical concerns around CRISPR made global news in 2018 when a rogue Chinese scientist He Jiankui 2018 announced that he had used CRISPR to create twin girls that were resistant to HIV.

“The main advantage of CRISPR is its incredible efficiency. We can optimize this to target a particular gene with 90% knock-out efficiency. You can also create true mutations in a cell where with other gene-editing technologies you can’t do it. However, one of the main shortcomings is its short RNA guide and Cas9 is not 100% on target. The nature of the short guide limits absolute specificity…this is something we are aware of and we are building controls around,” commented Dr. Luo.

Off-target CRISPR-Cas9 effects can include unintended deletions, inversions, mutations, and translocations that could cause harm to an organism. Improving CRISPR-Cas9 efficiency and specificity, meaning reducing these off-target instances and the associated risks, is critical to moving CRISPR-Cas9 from the lab, through the FDA regulatory review process, and ultimately into human clinical trials.

“The problem for CRISPR has always been trying to predict your off-targets. This is still the hot topic for people trying to move CRISPR into the clinic…Again, a lot of times people are sequencing only three or four hundred bases around a region and if you have a large deletion or chromosomal rearrangement you might not see it at all. You have to be aware of what’s happening on a larger scale, especially now when people are using multiple targets to drive that knock out rate to 90%,” said Dr. Kingsbury.

“This is a cool biologist’s toolbox and a really powerful and efficient system,” she added.

“Sometimes gene editing events get masked and this is something we have to pay attention to. We know there are off-target events and we know that Cas9 could go to places we don’t want it. Depending on how you are looking for off-target sites you might be missing them because you’re not using tools sensitive enough. This opens up a whole box of questions,” shared the FDA’s Dr. Fink.

“The pre-IND submission process is important. To get into the clinic you need to demonstrate safety first, efficacy comes later. Pre-submission interactions with CRISPR sponsors are critical. In the last three years, we’ve had a number of CRISPR-related submissions. All but one has been granted permission to proceed. Those people that came and talked to us beforehand made it through or are pending. The one that did not get past the first review did not have a Pre-IND submission meeting,” he added.

The future of CRISPR-Cas9 is bright but it still has a way to go to get through the regulatory process, translate to clinical trials and become therapies in the market.

“Anytime you modify a genome using CRISPR tools there is always the risk of off-target effects,” commented Dr. Brady. “It’s always going to come down to risk and reward. We’re going to see an evolution of the CRISPR-Cas9 technology that will be safer and we’ll see more sophisticated techniques for analyzing cells to determine the outcomes of genome editing. There’s always going to be a need to weigh risks.”

Dr. Kinsbury summed up the current state of CRISPR this way: “We need to find the right guides. We need better tools. The lab is easy but in the clinic, we need better solutions that also come with more robust options for monitoring potential side-effects.”

How questions surrounding CRISPR-Cas9’s specificity, efficiency, safety, and bioethics are answered will play an enormous role in translating its benefits from the lab to patients in need.   The panelists, the panel moderator, Montgomery College and BHCR genomic researchers across industry, government and academia are all striving to find new ways to enhance what’s already a remarkable, potentially history-changing gene-editing technology.

Given this panel’s large attendance numbers, the research community will certainly look forward to Montgomery College’s next panel, which will be about Single Cell RNA-Seq, on May 7, 2020, moderated by Dr. Michael Kelly, the team lead for the single cell analysis facility at the NIH.